Hardcore and Cruising: The Vulnerability of Man 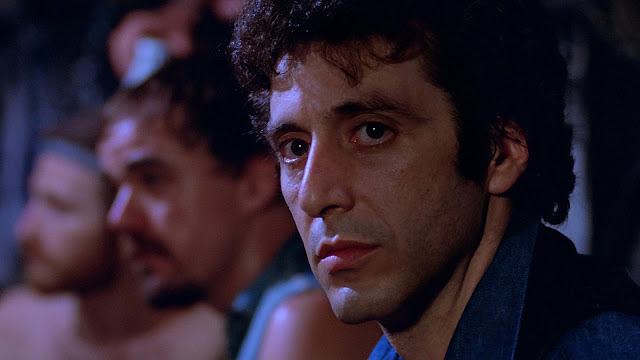 Whatever my lot, Thou hast taught me to know

These words were written by hymnist Horatio Spafford after his four daughters died in a tragic accident when the ship on which they were sailing across the Atlantic Ocean sank in 1873. I learned about the history of this well-known hymn when I was a youth pastor in Omaha, NE. For nearly 10 years I served families of all different races, backgrounds, and socio-economical statuses. I saw tragedy first hand as I sat with students dealing with depression, abuse, and addiction. I walked through the slums of San Jose, Costa Rica and played soccer with children in a field flooded with sewage. Through all of this, though, I struggled with letting down my guard and becoming vulnerable enough to truly feel and understand the circumstances about which I was hearing and seeing. Was that because I'm a man who's been subconsciously taught not to become vulnerable? Was it because I'm from the blue collar midwest where we're taught to smile and nod and just do our work? Was it because I worked for a church and had to act like a pillar – a rock on which the people could lean? And what does this have anything to do with film?

There's a moment in Paul Schrader's Hardcore where George C. Scott's character, Jake, is lying on his hotel bed in Los Angeles and “It Is Well With My Soul” is playing on the television. The backstory of the hymn mirrors that of Jake's story. He's a faithful servant of the Lord who is experiencing the greatest tragedy any parent could experience: his child has gone missing, and is possibly dead. Hardcore tells the story of Jake, a devout Calvinist in Grand Rapids, MI who sends his daughter off to a church retreat in California over the Christmas holiday. A few days later Jake receives a phone call that his daughter has gone missing. He flies out west, hires a sleazy private detective named Mast (Peter Boyle), and waits. Months later, Jake gets word that Mast is in Grand Rapids and wants to meet at an adult movie theater and sees that his daughter is now doing porno films. Jake flies back west to start searching on his own where he experiences a world full of characters completely different than his life back in the midwest. 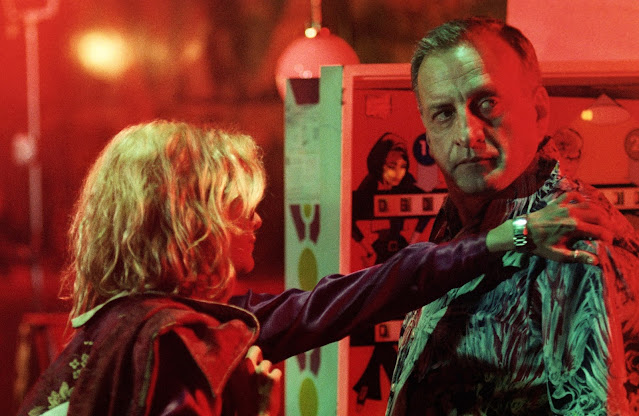 Not unlike William Friedkin's Cruising, Schrader has created a character who won't let down his guard. Between Scott's Jake and Al Pacino's Steve Burns, here we have two men who HAVE to become vulnerable in order to complete their mission. In Jake's case, he needs to find his daughter. In Burns' case, he needs to find the serial killer wreaking havoc on the leather bars of New York City. Both men enter sleazy worlds: Jake in the underground porno world, Burns in S&M gay clubs. And while both films end ambiguously concerning the future of their male protagonists, Jake, in all likelihood, will revert back to his old, traditional ways in Hardcore, where in Cruising we're left questioning whether or not Burns is one of the killers.

Hardcore opens like a live-action Norman Rockwell painting. Kids are sledding and ice skating. Men are shoveling sidewalks. A newspaper carrier tosses a roll from her satchel onto the path leading up to a house with smoke pouring from the chimney. But unlike Rockwell, who seemed to showcase idyllic New England settings, Schrader shows the muted, dreary tones of a midwestern winter. Everyone wears shades gray, the wallpaper in the house is a deadened yellow pattern, women wear dresses in colors ranging from white, to off-white, to off-off-white. The men are having a heated discussion on the meaning of Bible passages. The kids are watching a Lawrence Welk-type show on the television. The women are cooking. We are beaten senseless with how plain and simple (and religious) these people are. And, having lived in the midwest my entire life, it's a completely real and honest portrayal. 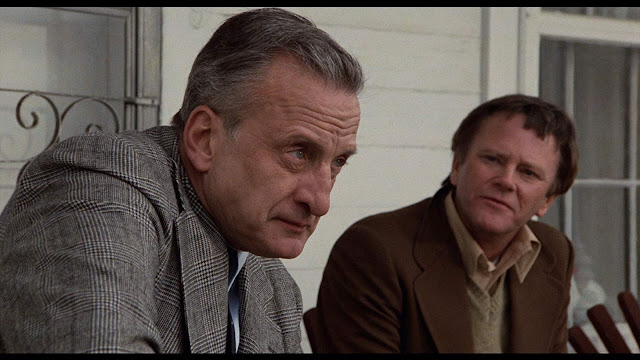 Having come from Grand Rapids, Schrader knows the character of Jake. I know the character of Jake. I'm sure most of us know a Jake. What Schrader (and in turn, Scott) nails, though, is something in his mannerisms. When Jake is presented with a new logo design for his manufacturing company (a brilliant blue, in stark contrast to everything else), he calls it “overpowering.” The woman who designed it, who seems happy just to have been given a project to call her own, is dejected, her only glimmer of hope for something different has just disappeared. Jake isn't angry. He doesn't scream. When the woman says she'll tone it down a little, Jake ends the conversation by turning it around and saying, “Good idea.” He smiles and nods. I know that smile and nod. I probably do that smile and nod. “Nebraska Nice,” is what we call it, and I hate it. You don't disagree with people to their faces. You say passive things out loud, while in your mind or behind their backs you spit vitriol. Smile and nod.

Cut to: California. Just like when Burns transforms into a different person after entering the leather bar world in Cruising, Jake transforms into a different person when entering the sex worker world in Hardcore. Where Burns trades in his police uniform for tight jeans, a wallet chain, and a leather jacket and boots, Jake turns in his gray sport coat and white shirt for loud, colorful floral prints and a blue jean jacket. At first both Burns and Jake are roleplaying (Burns as a club member, Jake as a porno producer), but sooner rather than later their new wardrobes become their own. Burns becomes friends with his gay neighbor, he starts participating in some activities at the clubs, and he comes dick-to-dick (literally) with his suspect. Jake meets Niki (Season Hubley), a sex worker who could possibly lead him to his daughter, and together they travel up and down California, meeting pimps and dungeon owners. There's no doubt that Jake is still his old, conservative self, though, whereas we're led to believe Burns is turning into a completely different person. 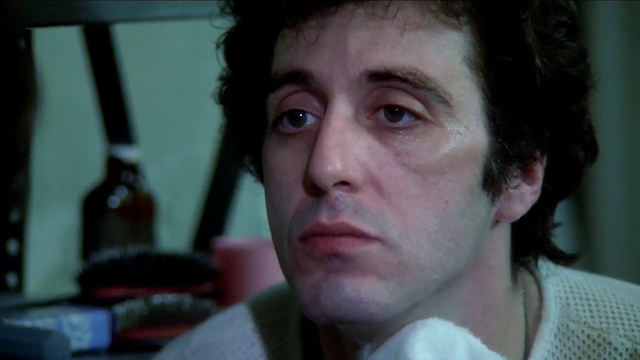 As the relationship between Jake and Niki grows – a father/daughter kinship – we start to see a glimmer of hope for Jake. Hope, meaning he could simply accept people for who they are, rather than trying to force upon them his personal beliefs. (Niki: “How important do you think sex is?” Jake: “Not very.” Niki: “Then we're just alike.”) It's minor, but a transformation nonetheless. He tells Niki he won't forget about her and leave her behind as soon he finds his daughter. As soon as he does find his daughter, though, we see right away he's reverting back to his old self. His daughter runs away and hides, and when Jake finds her she yells, “Don't hurt me! Get away!” She knows who he really is. She knows he's got a side to him of which we as the audience weren't privy. He responds, “You really want me to leave.” She says no, and then just like earlier when he turned the conversation around about the blue logo, he says, “Then you take me home.” A sweet sentiment, maybe, but that's not how I read it at all.

There were three ways Hardcore could have ended: a mix of redemption/tragedy (what we got); complete tragedy (everyone dies); complete redemption (everyone's happy). The movie ends with Mast telling Jake, “Go home, Pilgrim. There's nothing you can do. You don't belong here.” Mast sees right through him. Jake found his daughter (redemption) but in the end he doesn't really transform and leaves Niki behind (tragedy). The film ends with the same song we heard at the beginning, only this time we're looking down the street of the red light district of San Francisco instead of the picturesque midwestern suburbs. The transformation of (specifically) man is a hard subject to tackle. Friedkin goes the sensational route in Cruising while Schrader stays humble and honest (while venturing into light exploitation) in Hardcore. Both have an undeniable sleaze-factor, which is why they play well together, but it's the struggle with vulnerability of these two male protagonists that carries each film to a new, deeper level. 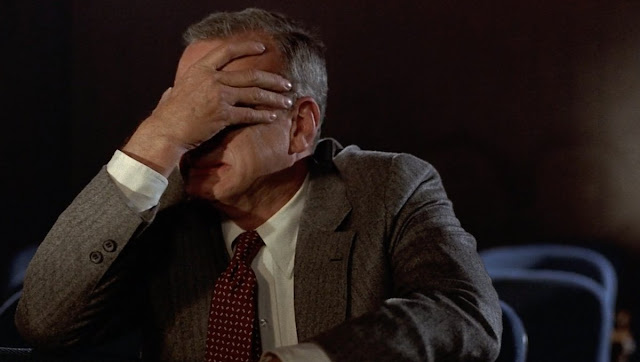