The Silent Partner: Portrait of the Toxic Male 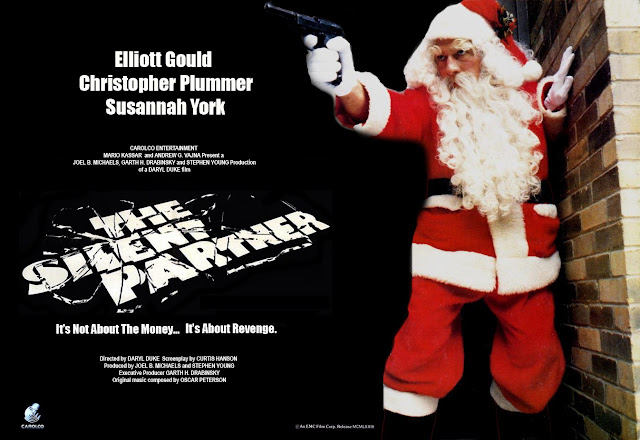 In Daryl Duke's 1978 thriller/comedy The Silent Partner Elliot Gould's character, Miles Cullen, is speaking with a co-worker and potential love interest, Julie. She says, “You've changed.” Miles responds with a hint of snark in his tone, “Can I consider that a compliment?” After a palpable hesitation, Julie answers, “Yes.” But her “yes” ends in somewhat of a question mark. This is the first time Julie has seen or heard any kind of domineering (read: abusive) remark from her colleague. To the audience, that's really our big indicator that Miles Cullen is a giant piece of shit.

The Silent Partner follows Cullen after he's involved in a bank robbery. Prior to the hold-up, Cullen had found a note written by the potential thief saying he had gun. On the day of the actual robbery, Miles is prepared and has squirreled away half of the money the burglar is expecting to get. From that point on Miles Cullen becomes the prey as our bad guy stalks, teases, scares, and hunts him down in order to get the money back.

Christopher Plummer is Reikle, our thief and hunter. Reikle sees his stalking of Miles as a game. While anger and jealousy are the driving force behind his motives, he finds a sense of enjoyment and, ultimately, sexual pleasure out of the game. Plummer plays Reikle as the sexy, brooding, bad boy. We're first introduced to him in a Santa costume. Hiding behind a padded stomach, the classic red and white suit, and bushy white beard, mustache, and eyebrows, we only see Reikle's piercing, near-hypnotic eyes through the getup. It's not until 20 minutes into the picture, and directly after the robbery, that we see Reikle strip away the festive facade, revealing his pronounced cheek bones, his cut jaw, tousled sandy blonde hair, and gorgeous arms extending out of a black tank-top. Upon first glance, we know this is a man who always gets what he wants – by his cunning, by his looks, and by his forceful nature. 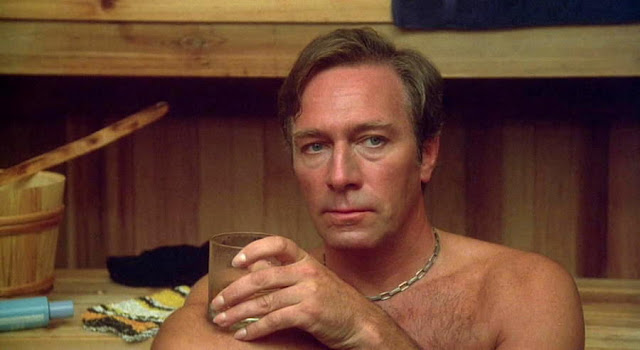 The man Reikle has just robbed is the complete opposite. Miles Cullen is quiet, awkward, stiff, and nerdy. He leads a simple, boring life playing chess by himself and obsessing over his fish tank. Miles spends his lunch hour observing people in the mall where the bank is located. He can only dream of living the lives of the people he watches. Miles admires his female colleagues from afar, and whenever they approach him he turns into an “awe shucks, gee whiz” school boy. His main love interest, Julie (Susanna York) is having an affair with the bank manager. Another male co-worker, Simonsen (John Candy), spends his time either fawning over the blonde secretary with big boobs or talking to his male coworkers about the blonde secretary's big boobs. Miles only wishes he could have the courage to speak to a woman confidently, go on a date, not to mention have an affair. He's nothing like Reikle. Yet the two men have one thing in common: they're two men who think they deserve anything and everything.

Weak men have fragile egos because they need to be in control. The problem is there is almost nothing in life that can be controlled. So when a weak man starts to realize that nothing can be controlled, he clings to anything he can to have that sense of control. And a weak man will almost always turn to his sexuality in some way or another to feel like he's in charge. His penis is attached to his body, therefore he can control it and force it to do whatever he wants. This doesn't always come out in the form of overt, sexual behavior. The Silent Partner shows us several different ways a man tries to gain control of his life and the world in which he lives by using different forms of sexuality.

The most obvious scenario is a man wielding a gun. I'm not a gun advocate, and if all the guns in the world just disappeared one day, I think we'd live in a safer world. I have shot a gun, though, and I'll tell you it was exciting and terrifying, but I never need to do it again. I understood the power I was holding in my hands. Holding a gun does make you feel powerful. And that's the terrifying thing. A gun in the hands of a fragile man is even scarier. The fragile man thinks he possesses all the power as he holds the gun. A gun is also phallus-shaped, and in the hands of a fragile man, becomes a dangerous tool he'll use to get what he wants. In The Silent Partner we see only two men wield guns: the bank's geriatric security guard, and Reikle. The security guard has a gun for practical reasons. Reikle, on the other hand, has a gun for one specific reason: to get what he wants.

After the robbery Reikle visits a club of some sort where the local ruffians hang out. He buys time with a prostitute, skips the sexual interaction, and proceeds to beat her within an inch of her life. At this point in his sad existence, it's clear that Reikle has lost control of the one thing a fragile man such as himself thought he could control: his penis. Reikle can't perform sexually, so he wields another phallus in place of his penis: a gun. He targets people he deems weaker than him (a petite sex worker, Miles, etc.) and gets what he wants out of them. In the case of the prostitute he places blame for the failure of his penis on her and beats her up. In the case of Miles, Reikle holds a hard, cylindrical object in his hands and demands money. When things don't go his way, though, he becomes confused and unhinged because he's starting to loose control again. He's kicked out of the club and deemed a loose cannon by his fellow miscreants, and he doesn't get all the money he expected to get from the robbery.

Miles, on the other hand, is experiencing power for the first time in his life. He appears on the news and becomes a local celebrity, Julie starts to see him in a different light, and women start giving him more attention. Before the robbery, Miles led a simple life. He knew how every day was going to go. The only sense of power he experienced before the robbery was lording over his expensive fish. It was a fine and simple existence, but he was in control. The robbery occurs, Miles' ego is boosted, and all of a sudden he realizes he's no longer in control. He stole from the bank and Reikle and now his life seemed to be spiraling. Panic and fear now controlled his life, and so Miles tried to adapt and change into the person he thought he always wanted to be. “You've changed,” Julie tells him. 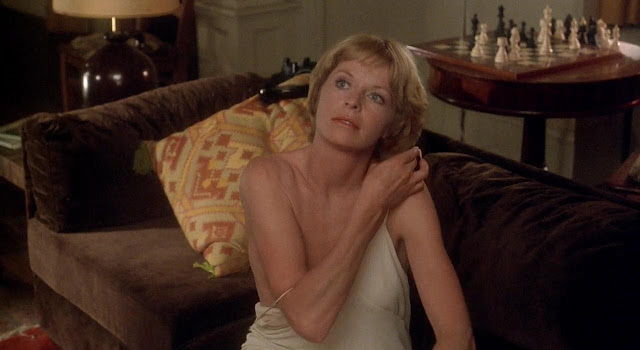 Plummer's transformation into Reikle is stunning. He fully immerses himself into this character who thinks he's in control of his life, but in reality is completely out of control. Like an out of body experience, Reikle can only watch his former self turn into the one thing he hates most. Reikle is a human being struggling with his sexuality. He's a weak man because he won't let the true human out of the cage that Reikle-the-man is keeping locked up. Not only does he beat up (not to mention decapitate) women because he's physically stronger than them, but because when he looks at a woman he sees what is truly inside himself. Notice the accessories he's wearing: literal chains around his neck and wrists. As the film moves along, we get to witness Reikle's transformation. We're introduced to him as an internationally-known male figure: Santa Claus. Next we see him in a skin-tight tank top. As the film progresses we notice Reikle has started wearing eye makeup – first eye liner, and then in a beautifully photographed close-up profile of his face, we see he is now wearing mascara. The conclusion of The Silent Partner sees Reikle complete his transformation when he shows up to the bank to retrieve his money dressed as a woman, complete with wig, makeup, skirt, blouse, and heals. When Miles sets off the alarm, Reikle once again wields his gun and tries to escape up the down escalator, showing us he's still just a weak man.

Just before his final transformation, Reikle meets up with Miles in a walking tunnel that, inadvertently or not, is shaped like a chorus line of women with their legs apart (think Busby Berkeley's choreography and direction in 42nd St.). The sexual overtones, innuendo, and tension between Reikle and Miles is unmistakable upon a rewatch of The Silent Partner. The title alone conjures up images of a couple with one being the abusive, domineering half and the other being, well, silent. Key lines in the movie scream innuendo – homoerotic innuendo, at that. The first time Reikle visits Miles at his apartment, he says through the mail slot, “If you can't be reasonable, one night, when you come home, you'll find me waiting on the inside.” When Miles calls the police and has Reikle arrested, he tells the operator, “He's got the rod on him.” After he hangs up, surprised and almost ashamed of himself, he says under his breath, “Rod? Jesus.” When Julie discovers Miles has a deposit box at the bank, she says, “I didn't know you had a box.” Gould does his pursed-lips thing and lets York's line reading sit thickly in the air.

The film is also full of sexual imagery. After hiding the stolen money in a safety deposit box at his bank, Miles hides the key in a jar of jelly where he slowly and intentionally pushes it down with two fingers and then licks his fingers clean. Later, after Miles has lost the key, a locksmith comes to the bank to open the safety deposit box. The camera slowly pushes in while the locksmith uses his drill to penetrate the lock, in and out, in and out. The imagery not only shows us these two men are lacking in confidence, but are ultimately fragile and scared. They need constant reassurance. More dialogue shows us this fact. “That's the second time someone said I underestimated them,” Miles says to Julie with a cocksure smirk. While Reikle is talking to Elaine (Celine Lomez), his spy while he's in jail, we see jealousy has become, and more likely has always been, one of his guiding lights. “He's good at it,” he says of Miles playing the game of cat and mouse. “Not like you,” says Elaine. “Nobody's like you.” Like anyone, words of encouragement are great energizers in life and show us people care. But Reikle and Miles, two fragile little men, need their egos stroked constantly to keep from shriveling up and dying.

The Silent Partner is full of fragile men and their toxic behaviors. Charles Packard, the bank manager and adulterer, sums it up perfectly. He tells Miles, “We're the ones that handle the money. There's nothing more important than that.” Packard realizes the power he has by controlling other people's money. He doesn't hide who he is. He's proud of being the piece of shit that he is. Of the four male characters we get any depth from, Packard is the most real. He's an asshole, but at least he's real. Reikle is clearly the film's antagonist. But Miles is only playing the victim. The movie ends with he and Julie riding away in an ambulance with a briefcase full of stolen money. Miles hasn't changed, and I argue he will never change because this one huge moment in his life just happened to go his way.