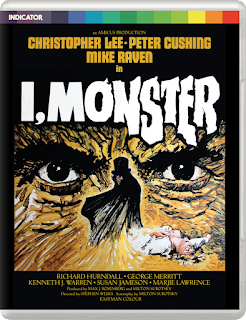 In 1886 Longmans, Green & Co. published a novella by the author Robert Louis Stevenson called “Strange Case of Dr Jekyll and Mr Hyde.” Since then that story of transformation from man to monster has been adapted hundreds, if not thousands of times for page, stage, and screen.

In 1970 Milton Subotsky, co-founder of Amicus Productions, set out to write the definitive adaptation of Stevenson’s story, changing, of course, the title characters’ names, with Freudian theories strewn about in the dialogue. The film, titled I, Monster, did not prove to be successful. Even with such powerhouse genre names attached like Lee and Cushing, Subotsky’s story failed to impress critics and audiences alike. So much so that the film didn’t even make it across the ocean to The States until two years after its initial release. And that’s only in part thanks to the Canon Group picking up North American distribution rights.

The film was the feature-length debut of Steven Weeks who, at the young age of 22, had impressed studio executives with his short 1917 (1970). In particular, Weeks had gained the eye of Christopher Lee, who was already attached to Subotsky's Jekyll and Hyde script. Lee requested Subotsky meet with Weeks in hopes the young director would get the job helming I, Monster. Weeks was more than capable of taking on yet another adaptation of a story that had already been wrung dry by the early 70s. And Subotsky saw a young director, hungry for his big break, willing to succumb to any requests (read: demands) his producer would voice. Unfortunately for both men, neither budged and both blamed the other for the failure of the film.

The film itself is quite good. While it's not the masterpiece that is Rouben Mamouilian's Dr. Jekyll and Mr. Hyde (1931) starring Fredric March and Miriam Hopkins, I, Monster is not nearly as bad as the initial reviews made it out to be back in 1971. Weeks shows real promise as a new voice in English cinema during a time when the movies became stale and tiresome. His direction of the camera shows he wasn't playing by the tattered rule book of filmmaking. He was 22 years old and he had fresh ideas he wasn't afraid to put on screen. The score by Carl Davis is fun and moody. Davis composes exactly what Lee is dictating on screen with his facial expressions and mannerisms. The art direction by Tony Curtis is stunning. Set in the Edwardian period of London, the exteriors (many shot by forced perspective) exude the dreariness always assumed with this time period while the interiors fill the screen with opulent colors and dressings. Bridget Sellers' costumes are lush and ornate, from the luxurious suits worn by the men to the bustier-clad prostitute at the pub.

The acting, naturally, is flawless. Cushing and Lee are at home in their element. Cushing is the detective, investigating the crimes committed by Lee's Hyde (in this case, Blake). Lee is the eponymous “monster,” but instead of Dr. Jekyll, he is Dr. Marlowe, and instead of Mr. Hyde, he transforms into Blake. While Cushing's performance is very good, I don't consider it to be one of his most memorable characters. Lee, on the other hand, is out of his Dracula make-up, and into a role I would compare to somebody he would embody two years later: that of Lord Summerisle in Robin Hardy's The Wicker Man (1973). Lee is as stiff and dry as the script in the Marlowe role, but when his Blake is unleashed, he's an entirely different animal. Granted, that's the whole point of the story, but as the film progresses Lee is almost unrecognizable. Aided by the wonderful make-up job, undoubtedly, but his entire body moves differently. His mouth forms words differently. His eyes look into the camera differently than they had before. It's a remarkable performance, and one I won't soon forget. Indicator has released, for the first time ever on Blu-ray, a gorgeous Limited Edition of I, Monster filled with hours of extra features. The film itself has received a beautiful 2K restoration from original film materials, and is available in two presentations: the first being the original 75-minute theatrical release, and the second being an extended 81-minute version. There are two commentaries featured with the film. The first is a previously-recorded track from the 2005 DVD release with Weeks and film historian Sam Umland. The second is a brand new track recorded for the Indicator release featuring Weeks. The new track contains lots of information and fun side notes by Weeks as he's obviously reading from a script. It plays like an off-screen narrator recounting stories of the past. This isn't to say it's bad. I quite like commentary tracks like this. The only downside is that it's spotty, in that Weeks will share an anecdote about an actor or a piece of scenery and then long chunks of the movie will play out with no commentary.

Along with the two commentary tracks, there is an audio interview with editor Peter Tanner from the British Entertainment History Project from 1987 (The BEHP Interview with Peter Tanner – Part One, 1914-1939; 75 mins.) that plays in tandem to the theatrical cut of I, Monster. There is a brand new interview filmed with composer Carl Davis (I, Maestro; 18 mins.) where he discusses his work on the film. There is a brand new introduction to I, Monster with Stephen Laws where he gives a brief history of the film (6 mins.), as well as an archival interview between Laws and Weeks from 1998 (Stephen Weeks at the Manchester Festival of Fantastic Films, 16 mins.). The interview is ripped directly from a VHS recording so the video and audio quality are nowhere near today's standards, but don't compromise the discussion itself. Two trailers are included in the extra features – one from the U.S. and one from the U.K. which includes a Trailers From Hell-style commentary from critic Kim Newman and historian David Flint. Like any commentary you'd find on TFH, this one is short and sweet and gives any and all pertinent information pertaining to the film. There is also a 36-page booklet included with the Blu-ray, which includes a masterfully-written brand new essay on I, Monster and the history surrounding it written by Josephine Botting from the BFI National Archive. Also included in the booklet is a revealing excerpt from a Cinefantastique interview with Milton Subotsky about the film, extracts from an entertaining Troy Howarth interview with Weeks presented as a sort-of rebuttal to the Subotsky excerpt, and two reviews of I, Monster from David Pirie (Monthly Film Bulletin, 1971) and Mike Pitts (Cinefantastique, 1973).

The coup de grace of this stacked release, though, is a three-hour audio interview with Subotsky conducted by writer Phil Nutman comprised of several recordings from 1985. As the title cards preceding the recording state, “It is likely the most thorough interview with Subotsky about the studio ever conducted... This is the first time that these excerpts of the many hours of the actual audio recordings of those sessions have been published in the UK.” The purpose of the interviews was to form the basis of an exhaustive book about Amicus, which unfortunately never made it to print. Again, the audio was recorded on consumer-grade recording equipment from the 80s, so the quality isn't great, but it isn't terrible. And this interview is worth the price of the entire disc alone.

If you've never experienced the work Indicator puts into their releases, now is the time. While they do offer several All-Region discs, their Region B releases are reason enough to upgrade to that multi-region player.