Curse of the Undead 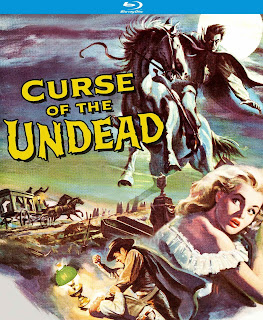 Curse of the Undead seems like some sort of bastard Western conceived of half-efforts by Kazan, Bava, and Lewton. Such negative words like “bastard” and “half-efforts” may lead you to believe Curse isn't good. On the contrary, the film directed by Dein and co-written by he and his wife is beautifully constructed and portrayed. A vampire movie that plays by its own rules (the vampire can walk into the sunlight), Curse of the Undead is undoubtedly unique in the sense that you could be watching an episode of Gunsmoke written and directed by Rod Serling.

Curse of the Undead, unofficially the very first vampire-Western, tells the story of a drifter named Drake Robey (Pate) who comes upon a quiet town full of your usual characters in Westerns of the 50s. A preacher, a drunk, a town bully, a gutless sheriff, the soon-to-be-penniless-land-owner, and his daughter. Dressed head to toe in black, Robey seduces the townsfolk by playing up his mysteriousness. Preacher Dan (Fleming) sees through the con of this dark stranger. He's engaged to Dolores Carter (Crowley), who unfortunately falls prey to the charm of Robey. Dan, a Christian and a pacifist, after discovering who and what Robey really is, is then confronted with the problem of having to stop this monster from destroying his town and his life.

The vampire sub-genre fits nicely into the dusty, lonesome setting of a Western storyline. What vampire wouldn't dream of a sleepy town in the middle of nowhere, full of sustenance to last for days on end? Look at modern vampire tales like 30 Days of Night, Fright Night, A Girl Walks Home Alone at Night, or Let the Right One In. All take place either in secluded towns, sleepy neighborhoods, or claustrophobic apartment buildings. The setting itself is key to how and where the monster acts and moves. So to set an otherwise tame and unoriginal story of a vampire in the Western locales where Hawks and Ford frequently worked is quite exciting and original.

Like most vampire movies, Pate's Drake Robey is extremely charming. I found myself falling for him on several occasions, full well knowing he was playing the movie monster. His performance is spot-on, combining the styles of horror and Westerns perfectly by marrying the characters of the vampire and the dark stranger. His performance comes off as genuine, and according to the commentary, this was Pate's favorite role he ever played. Fleming's Preacher Dan is cold, abrasive, and reminded me of Liam Neeson for some reason. Preacher Dan is stiff and noble while he stands in the public eye, but hard when alone with Robey, or soft when alone with Dolores. This all speaks highly to the performances, as I gather this is exactly what the Deins were aiming for in their script. The shot compositions by Dein and the cinematography by Ellis W. Carter are breathtakingly exquisite. For content that makes up a B-movie, the look of the film is something you'd see from Howard Hawks or John Ford. The shadows cast by and upon characters and set-pieces are that of the work of Mario Bava. Dein's long takes (ranging anywhere from 30 seconds to three minutes!) are absolutely stunning shots not unlike shots seen in the films of Elia Kazan. Because of the beauty of the artistry in Curse, this film deserves a bigger audience. 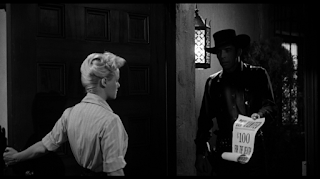 Some of the most fascinating aspects of the vampire sub-genre are the subtle and not-so-subtle homoerotic references. For starters, the two original titles were possibly too on-the-nose for studio executives: Eat Me Gently and Affairs of a Vampire. There is no doubt, from those titles, Edward and Mildred Dein had zero reservations about infiltrating the macho Western genre with the otherness of the vampire sub-genre. Interactions between men in the saloon, or several confrontations between Preacher Dan and Robey include inuendo that is so clearly written and spoken with a purpose other than to intimidate the other party. To see how the Deins were able to mix the “masculine” world of the Western and the “feminine” world of homosexual relationships is really quite remarkable.

As for the Blu-ray, the brand new 2K transfer is exactly what Edward Dein's beautifully-shot film deserved. The black and white photography is some of the most gorgeous I've ever seen thanks in part to the fine folks at Kino. From Drake Robey lurking in the shadows to the final showdown at high noon under the blazing sun, every frame of the film on this disc is stunning.

Along with a small handful of trailers, the disc also includes a brand new commentary from Film Historian Tom Weaver. Weaver comes from Sleepy Hollow, NY, and his slight New England accent along with his soothing, Jean Shepherd-esque tone provides a comforting narration to the film. Weaver provides an abundance of information about the film, its cast and crew, and history of the studio system and the world independent cinema of the time. He includes actor recreations of interviews with Edward Dein, Michael Pate, Kathleen Crowley, as well as a seven-minute lecture about the music of Curse of the Undead with musicologist and frequent Weaver collaborator David Schecter.

There have been vampire-Westerns since, but it's always nice to see where it started. KL Studio Classics has released a little-known gem that is overdue for discovering from Western and horror fans alike.